Want to prevent fellow triathletes from becoming annoyed with you during a race? Avoid these mistakes commonly made during a pool swim.

From my experience with sprint triathlon, here are the top five mistakes, in no particular order, that occur doing a pool swim:

This mistake most often occurs during registration when you are asked to provide an estimate of the time that it will take to complete the swim.   You definitely do not want to be swimming with triathletes who are significantly faster or slower than you.

If you are worried about the registration filling before you can time your swim, give your best estimate.  Then, after later measuring the time, contact the race organizer to make any correction.

With adrenaline rushing and the crowd roaring (even a small crowd can be deafening in an indoor pool), it is tempting to start swimming too fast too soon causing your heart rate to spike or breathing to become difficult.  The next thing you know, you are swimming much slower than planned or even stopping to catch your breath.  Better to start out at what you consider to be a bit slower that you think you should until you are in a rhythm.  Once your breathing is at a normal race pace and you are ‘warmed up, give it your all.

Drafting is considered by many to be one of the keys to conserving energy during the swim while at the same time turning in a respectable (for you) time.  The problem with drafting is that it can be difficult to practice unless you swim with a group.

To take advantage of drafting, swim with your hands just behind the feet of the person in front of you.  (Avoid touching their feet which sends the message that you want to pass them.)

Even if the swim involves a single length of each of several lanes in a Z-pattern, stay to the right as a matter of courtesy to faster swimmers.  You will appreciate this if you are the faster swimmer. Staying within your space during a pool swim will allow faster racers to pass.

Another courtesy to fellow racers is to allow faster swimmers to pass.  Let them pass as soon as possible once they have signaled that they want to do so.  Typically, faster swimmers will tap one of the feet of the swimmer that they wish to pass.  If you can, move to the right side of the lane to allow them to pass.  In races in which the entire length of swim involves multiple laps within a given lane, it is typical for the racer who is being passed to pause at the end of a length.  Allow the faster swimmer or swimmers to pass you, and then resume your swim.

What is your experience?

Have you identified other mistakes or have experience with those I have listed? Leave your comments below.

The SafeSwimmer Float provides visibility and more for triathletes training for open water swims. Check out the video review of the product below.  Information for getting one for yourself can be found at the end. END_OF_DOCUMENT_TOKEN_TO_BE_REPLACED Finisher medals and age group awards can be one of the treats of completing a triathlon if only to see the creativity of the race organizers.  The following pictures show the 5 most unique triathlon medals I have received, in order of race date.

END_OF_DOCUMENT_TOKEN_TO_BE_REPLACED 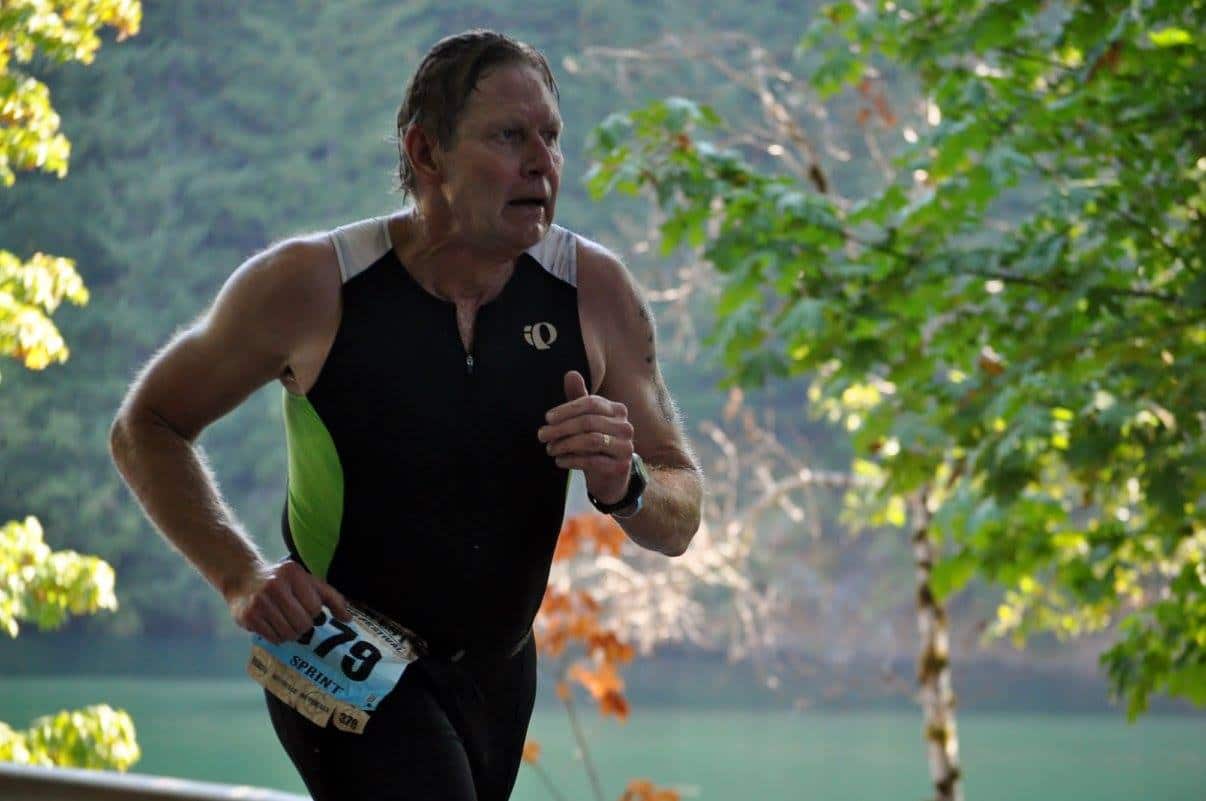 Is running safe for seniors, defined here as those age 50 and over? What if our joints are showing early or advanced signs of arthritis?

This post summarizes what I learned while investigating what science has to say about running for seniors.

What Does the Research About Seniors and Running Tell Us?

A majority of senior triathletes come to the sport from a background of running. However, those who have not spent their ‘before triathlon’ lives as runners face at least some level of confusion about whether they should begin running later in life. The ‘conventional wisdom’ is that running is hard on our joints, especially those that may already show signs of age.

An internet search of the phrase ‘running vs. walking’ produced interesting and even pleasantly surprising results from academic research. It turns out that academic research results do not support the conventional wisdom.

I must preface the following comments with the disclaimer that the physicians of some, including my wife, who have artificial knees, hips, or other joints may advise their patients against running. I am not qualified to debate this advice.

However, if your doctor has given you the ‘ok’ to run, then consider the following.

Running and Injuries for Seniors

A review of 400 articles which covered 15 studies based on data gathered for the same subjects over time produced the following conclusions:

A drawback of running is the relatively high risk of injury, with an incidence varying between 19% and 79% according to a review of several studies. . . . Acute running injuries are rare, consisting mainly of muscle injuries, sprain, or skin lesions (blisters and abrasions).[1]

The major conclusions from this review were that the tendency for injury is higher for those, especially men, with a history of leg injuries and that shoe inserts/orthotics should be avoided. Podiatrist treatment could be beneficial to people who suffer these types of injuries (such as places like heartlandpodiatry.com). The authors admitted that there could be a connection between previous injury and the use of inserts. “It is possible that runners who are more prone to injury are given orthotic/inserts earlier”.

Only one of eight studies included in the review showed that age had a significant effect on injuries. In the one study which did show an effect, age was shown to make subjects more susceptible to overuse injuries, especially to the hamstrings and Achilles tendon.

Another report showed that the link to leg injuries is primarily related to two anatomical factors – feet with high arches (cavus feet) and unequal leg length.[2]

There is also evidence that for older runners, the loss of shock-absorbing capability can increase overuse injuries. However, this can be countered through the use of running shoes with optimal cushioning properties and by limiting running under high impact conditions.[3]

The Benefits of Running Outweigh the Risks

Even if we interpret these studies to mean that older runners are more susceptible to overuse injuries, the conclusions suggest that these factors can be managed.

On the other hand, there is plenty of evidence from research to show that there are important benefits of running.

Another study[5] concluded that older runners had modified their biomechanics to adjust for reduced strength of some muscles of the calf. The result was more effective movement of older runners during walking as compared to their non-runner counterparts. Researchers concluded that “runners may be able to transfer motor adaptation from running to walking even in old age.”

One other study[6] concluded similarly that “vigorous exercise, such as running, prevents the age related deterioration of muscular efficiency and, therefore, may make everyday activities easier.” The study showed that “running economy”, which is determined primarily by the storage and release of elastic energy from the leg, is only minimally different between young runners and those over 65 years. Crossing the finish line at the Maple Grove, Minnesota triathlon

Weight control through running for seniors

Running has also been shown to be more effective for weight control than walking alone. In one study[7], researchers attempted to determine if running and other exercises, including walking, would produce the same benefits in terms of weight control (BMI and waist circumference). The conclusion was that non-running exercises could not be substituted for running to achieve the same weight loss results.

Similarly, another study[8] showed that even though the change in BMI is strongly related to the change in energy expended for both running and walking, the change in BMI was greater for running than walking This means that running would be good to get involved in, and getting some appropriate clothing (such as that from https://www.ryderwear.com/collections/womens-shorts
) can help the process be easier and less dragging on the body.

Studies have also shown that exercise, whether running or walking, significantly reduces cardiovascular disease, Chronic Kidney Disease, pneumonia, influenza and other illnesses in people with diabetes. [9] Likewise, the risk for fatal brain cancer has been shown to be reduced by both running and walking. [10]

Running has also been shown to significantly reduce mortality of breast cancer after diagnosis, whereas walking was shown to have a non-significant effect. [11]

More Running is Not Always Better?

People who are physically active have at least a 30% lower risk of death compared to those who are inactive. However, according to conclusions of the Copenhagen City Heart Study [12], the ideal amount of exercise for improving longevity is uncertain.

Findings of the study found that light and moderate runners have lower mortality than sedentary non-runners. On the other hand, “people who run most days of the week at a pace faster than 7 miles per hour have the same risk of death as sedentary individuals.” [13] That’s good news for slow runners like me!

Running Can Be Good For Seniors

Science shows that running has a number of health benefits. The benefits of running are generally greater than those from walking alone, especially when done in moderation.

While running is more likely to lead to injury than walking, paying attention to and minimizing conditions that lead to overuse injuries – along with strength training and stretching – will minimize the occurrence of injuries.

Remember, if you have not been running recently, start slowly (see How To Start – Or Re-Start – Running). If you have been running, don’t increase distance or intensity too quickly.

Leave Your Comments and Questions Below

What are your thoughts about the conclusions presented here?

Has your running changed with age? If so, how?

[7] Williams P. T., “Non-exchangeability of running vs. other exercise in their association with adiposity, and its implications for public health recommendations“, PLoS One. 2012;7(7):e36360.

[13] Greenfield, Paige, “Why Walking Is Better Than Running”, http://www.huffingtonpost.com/prevention/walking-versus-running_b_8123084.html.